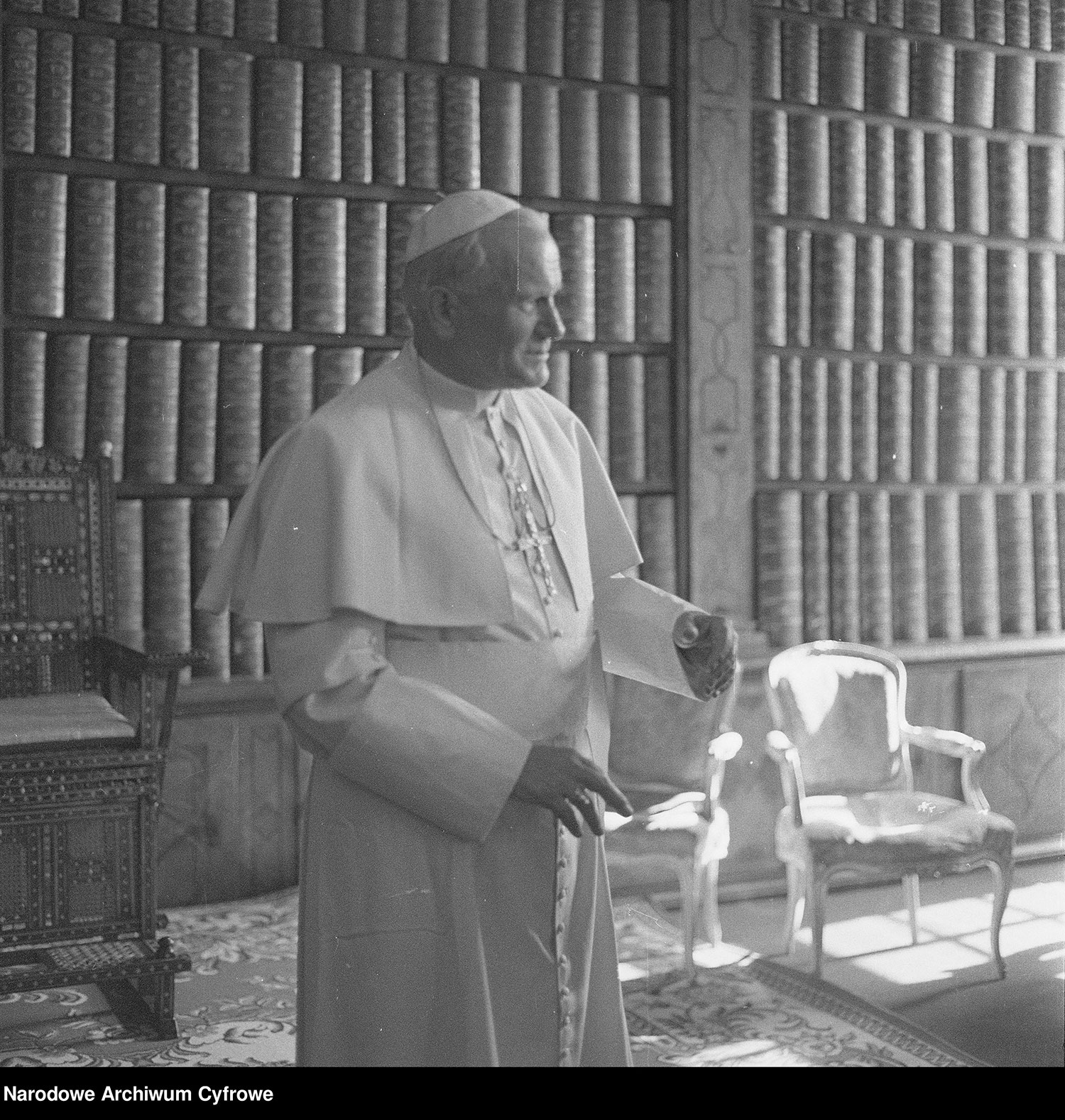 Lolek, as he was called in his childhood, was a conscientious pupil who willingly helped his classmates.

His childhood and teenage years were not easy. His beloved mother died when he was 9 years old. Three years later his brother Edmund died and he enjoyed his father’s love for only little while longer as the latter died in Krakow in 1941.

He was ordained as a priest on 1st November 1946 after which he went to study in Rome. Two years later he became a priest at Niegowić. Currently, the wooden church from the village where the young priest carried out his ministry can be found in Mętków (in the Chrzanów district). It was transported there between 1972 and 1974.

He was appointed Auxillary Bishop in 1958 and Archbishop of Krakow six years later. And in 1967 he was promoted to the Sacred College of Cardinals.

He was elected Pope on 16th October 1979 when he took the name John Paul II. He almost died on 13th May 1981 when Turkish gunman Ali Agca fired at him on St Peter’s Square in Rome.

Visits to Poland play a significant role in the pilgrimages of the Polish Pope who travelled to many countries around the world. The first of eight visits to Poland was in 1979 during which he held mass at the former Nazi German concentration camp Auschwitz-Birkenau. It was then, during his homily, that he spoke the famous words “It was impossible for me not to come here as Pope.”

The process of beatification for Karol Wojtyła’s parents, Karol Snr and his wife Emilia nee Kaczorowska, has begun – May 2020.

The family home in Wadowice now houses a modern multi-media museum dedicated to the Wojtyła family and the life and works of the Polish Pope.

Excerpts from the homily given at former Nazi German concentration camp Auschwitz-Birkenau on 7th June 1979. 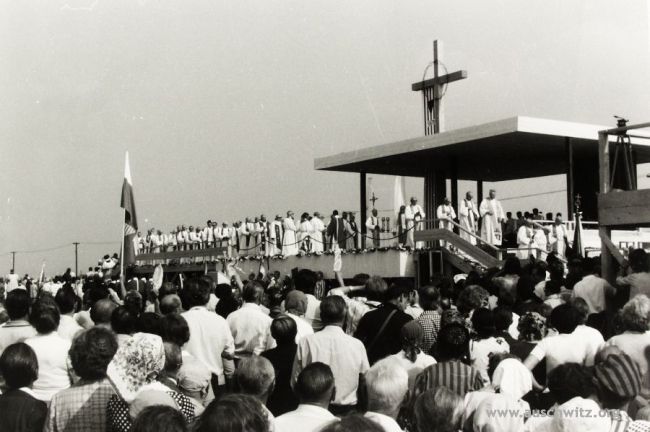 “I am here today as a pilgrim. It is well known that I have been here many times. So many times! And many times I have gone down to Maximilian Kolbe’s death cell and kneeled in front of the execution wall and passed among the ruins of the cremation furnaces of Birkenau. It was impossible for me not to come here as Pope.” 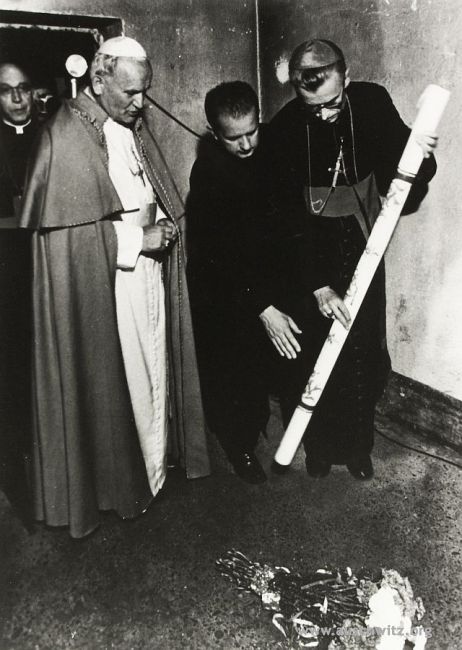 “I have come then to this special shrine, the birthplace, I can say, of the patron of our difficult century, just as nine centuries ago Skałka was the place of the birth under the sword of Saint Stanislaus, Patron of the Poles.” 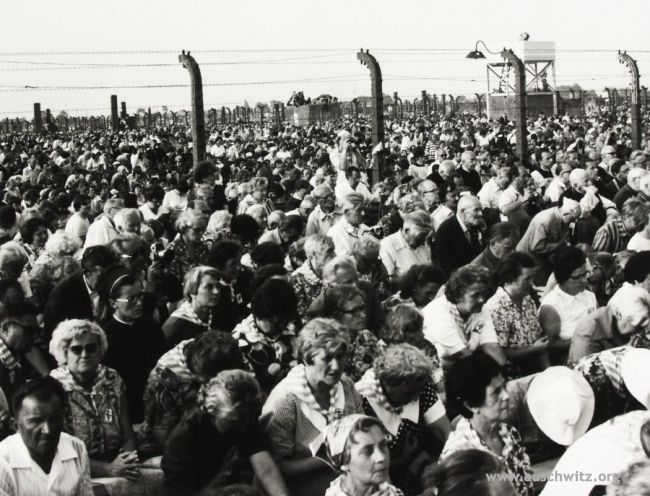 “I have come to pray with all of you who have come here today and with the whole of Poland and the whole of Europe. Christ wishes that I who have become the Successor of Peter should give witness before the world to what constitutes the greatness and the misery of contemporary man, to what is his defeat and his victory.” 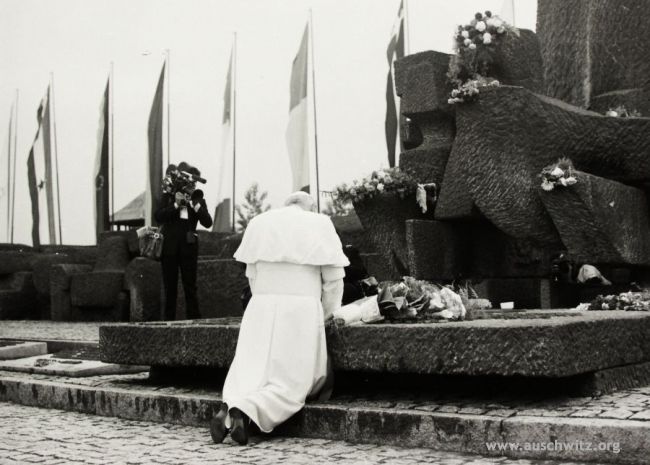 “I have come and I kneel on this Golgotha of the modern world, on these tombs, largely nameless like the great tomb of the Unknown Soldier. I kneel before all the inscriptions that come one after another bearing the memory of the victims of Birkenau in languages: Polish, English, Bulgarian, Romany, Czech, Danish, French, Greek, Hebrew, Yiddish, Spanish, Flemish, Serbo-Croat, German, Norwegian, Russian, Romanian, Hungarian, and Italian.” 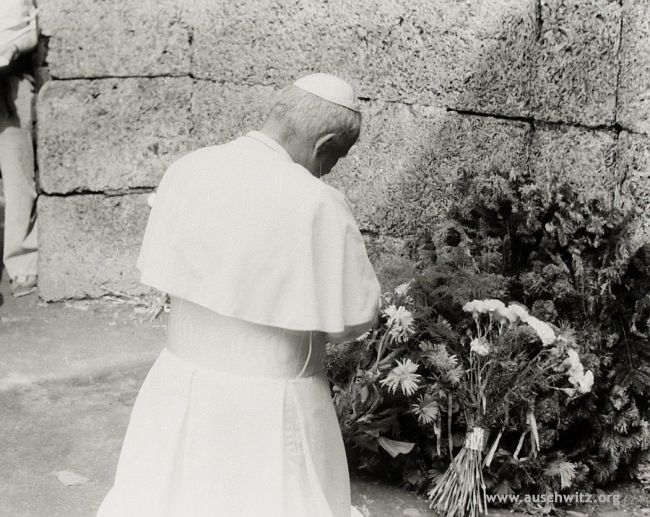 “Auschwitz is such a reckoning through these plaques which remind us of the sacrifices the nations suffered. It is impossible merely to visit it. It is necessary on this occasion to think with fear of how far hatred can go.” 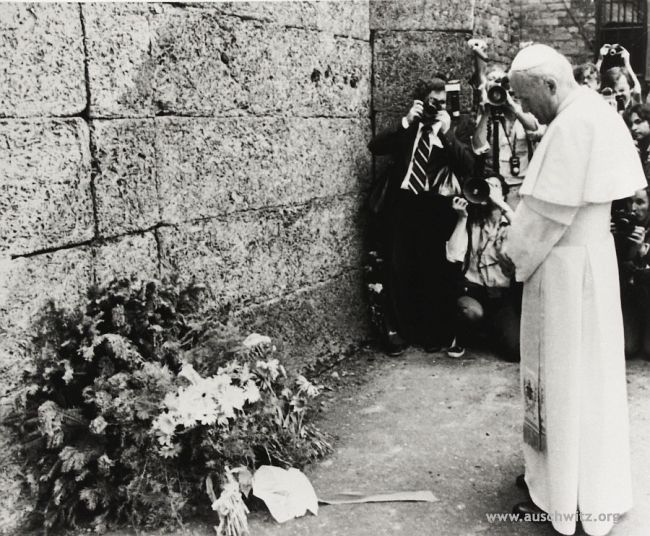 “Auschwitz is a testimony of war. War brings with it a disproportionate growth of hatred, destruction and cruelty. It cannot be denied that it also manifests new capabilities of human courage, heroism and patriotism, but the fact remains that it is the reckoning of the losses that prevails. That reckoning prevails more and more, since each day sees an increase in the destructive capacity of the weapons invented by modern technology.” 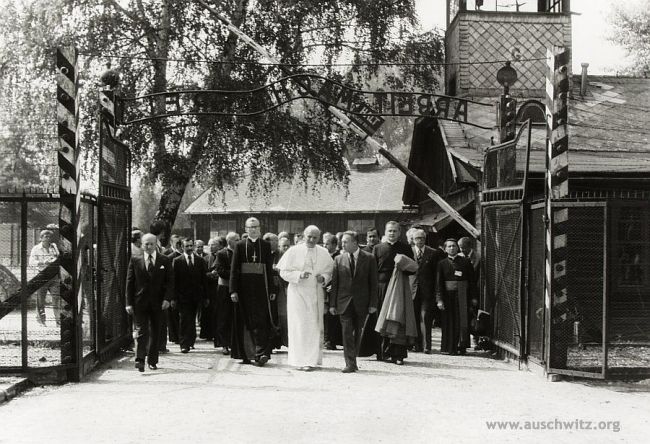 “Not only those who directly bring about wars are responsible for them, but also those who fail to do all they can to prevent them.”