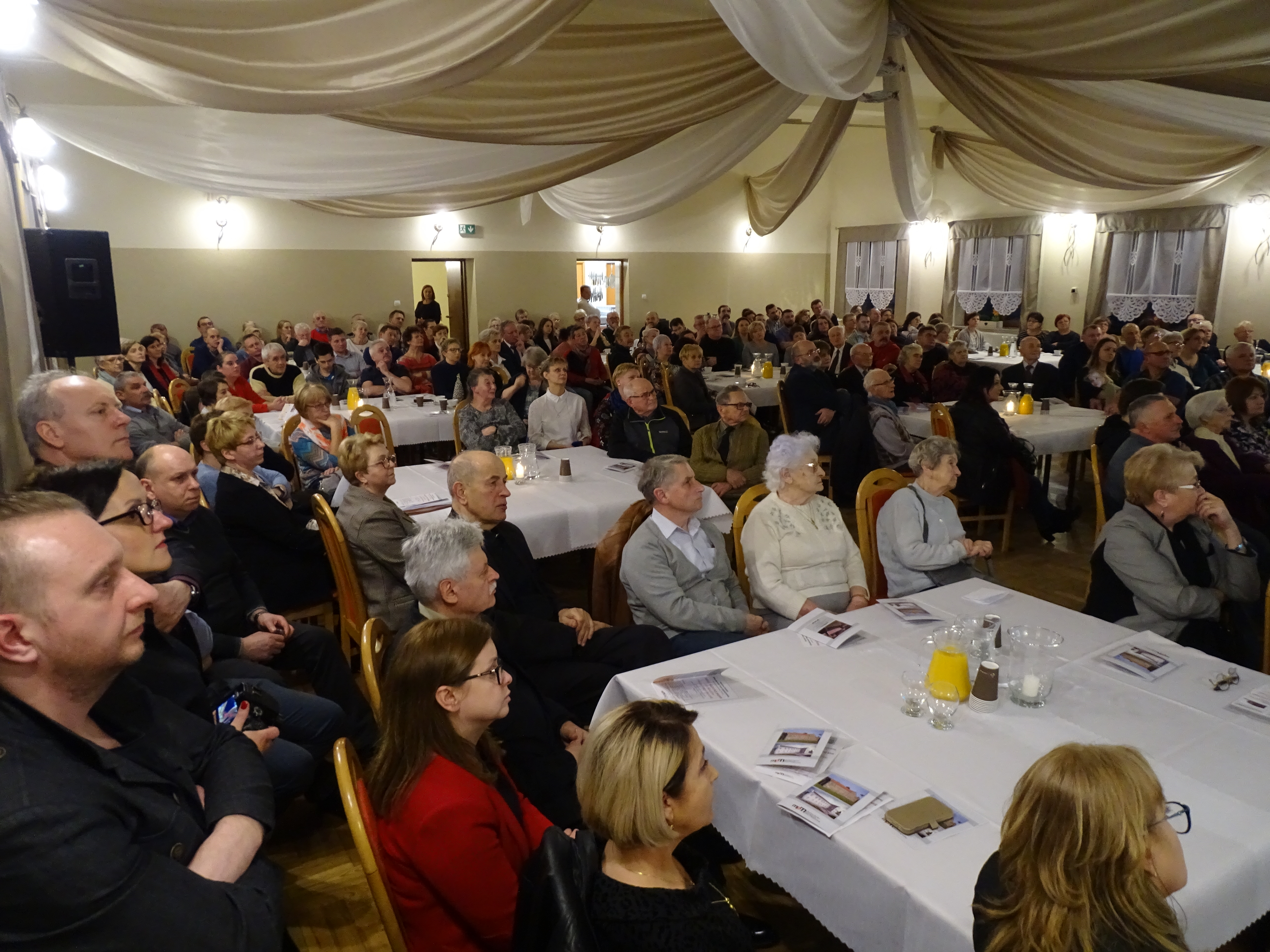 [vc_row][vc_column][vc_column_text]Over 170 people attended the encounter with history entitled “We will remember it all. The fate of Brzeszcze inhabitants during WWII.”

Seventy-five years have passed since the end of the war. However, the number of those gathered in the Voluntary Fire Service Hall at Piastowska street shows how the fate of people under the German occupation, and in particular the local aid rendered to the prisoners of the Nazi German concentration camp Auschwitz still greatly fascinates people.

We do not know them all…

“Our activities are worthwhile when we see a response as we have seen today. You are living in a unique area when considered through the prisma of historical research and the issue of aid rendered to Auschwitz prisoners. The list of those who rendered aid in this relatively small area is very long. And it still remains unfinished. We, as the Remembrance Museum in the future, intend to complete this list which was started by Mr Henryk Świebocki. This will only be possible with your help, with the help of shared memories, stories and information, which I hope you will be willing to share with our Museum,” said Dorota Mleczko, Remembrance Museum of Land of Oświęcim Residents director.

During the over 2-hour gathering, Zofia Przybyłowska spoke of the fate of her family who was evicted by the Germans from Bor and also mentioned the great help they received from Brzeszcze locals.

Those helping the prisoners were not rivals.

Grzegorz Baczkowski and Józef Stolarczyk spoke of the activities of Jan Nosal, pre-war Polish Socialist Party member of parliament who was engaged in aiding KL Auschwitz prisoners and underground activities in Brzeszcze. He was arrested for this by the Germans and was killed in Auschwitz in 1944.

“There was no political rivalry in our area. There was only total cooperation to help those people who lost their health and their lives in the camp,” highlighted Józef Stolarczyk.

In her presentation which was richly illustrated with documents and photographs, the acting director of the Museum of Pharmacy of the Jagellonian University Collegium Medicum, Dr Agnieszka Rzepiela, focused on the legendary pharmacist from Brzeszcze Maria Bobrzecka, who, just like Jan Nosal, was engaged in aiding prisoners.

She highlighted the fact that for “Marta”, as Maria Bobrzecka was known, the type of underground grouping was irrelevant. The most important thing was to help. She cooperated with everybody.

“This included the Land Army and the Peasants’ Batallions as well as the local Polish Socialist Party association of which she was a member,” said Agnieszka Rzepiela.

Małgorzata and Jolanta Morończyk spoke of the aid rendered by Stanisława Morończyk, yet another heroine who helped Auschwitz prisoners and whose activities have been shown in the film “Przerwana lekcja” by Paweł Sawicki. (“Interrupted Lesson”. Film in Polish only)

“Auntie was in the Land Army and was a courier. She had the pseudonym “Little Stasia” because she was not very tall,” recalled Małgorzata Morończyk.

Teacher Jolanta Hodur links the past to the present in her activities. As part of the project organised in cooperation with the Remembrance Museum of Land of Oświęcim Residents entitled “Knowing the risk…” with pupils from Skidzin, Przecieszyn and Brzeszcze, she visited memorial sites in the municipality. These visits were a departure point for conversations about the history of the area.

“It turned out that many of the young people involved had no idea. For example, they did not know that the unfinished electrical plant Andreas was in the municipality,” she said, mentioning a WWII construction.

“We have a kind request. If you know anything about teachers involved in underground secret education or are in contact with people who may know something of their work, please do get in touch with the Remembrance Museum of Land of Oświęcim Residents.”

The audience had the opportunity during the gathering to listen to new pieces of music by the Brzeszcze band “Besides.” Piotr Świąder-Kruszyński spoke briefly of the band’s latest project.

More than 170 people attended the encounter with history at the Voluntary Fire Service hall in Brzeszcze.

Participants of the encounter in Brzeszcze.

Dr Agnieszka Rzepiela from the Museum of Pharmacy of the Jagellonian University Collegium Medicum in Kraków spoke of the heroic pharmacist Maria Bobrzecka.

Zofia Przybyłowska spoke of aid rendered by Brzeszcze locals to the inhabitants of Bor.

Among the assembled guests were the director of the International Centre for Education about Auschwitz and the Holocaust in Oświęcim Andrzej Kacorzyk (left) and Henryk Świebocki, historian and author of the book “People of Good Will.”[/vc_column_text][/vc_column][/vc_row]