We are looking for relatives of Władysław Jakubowski from Brzeszcze 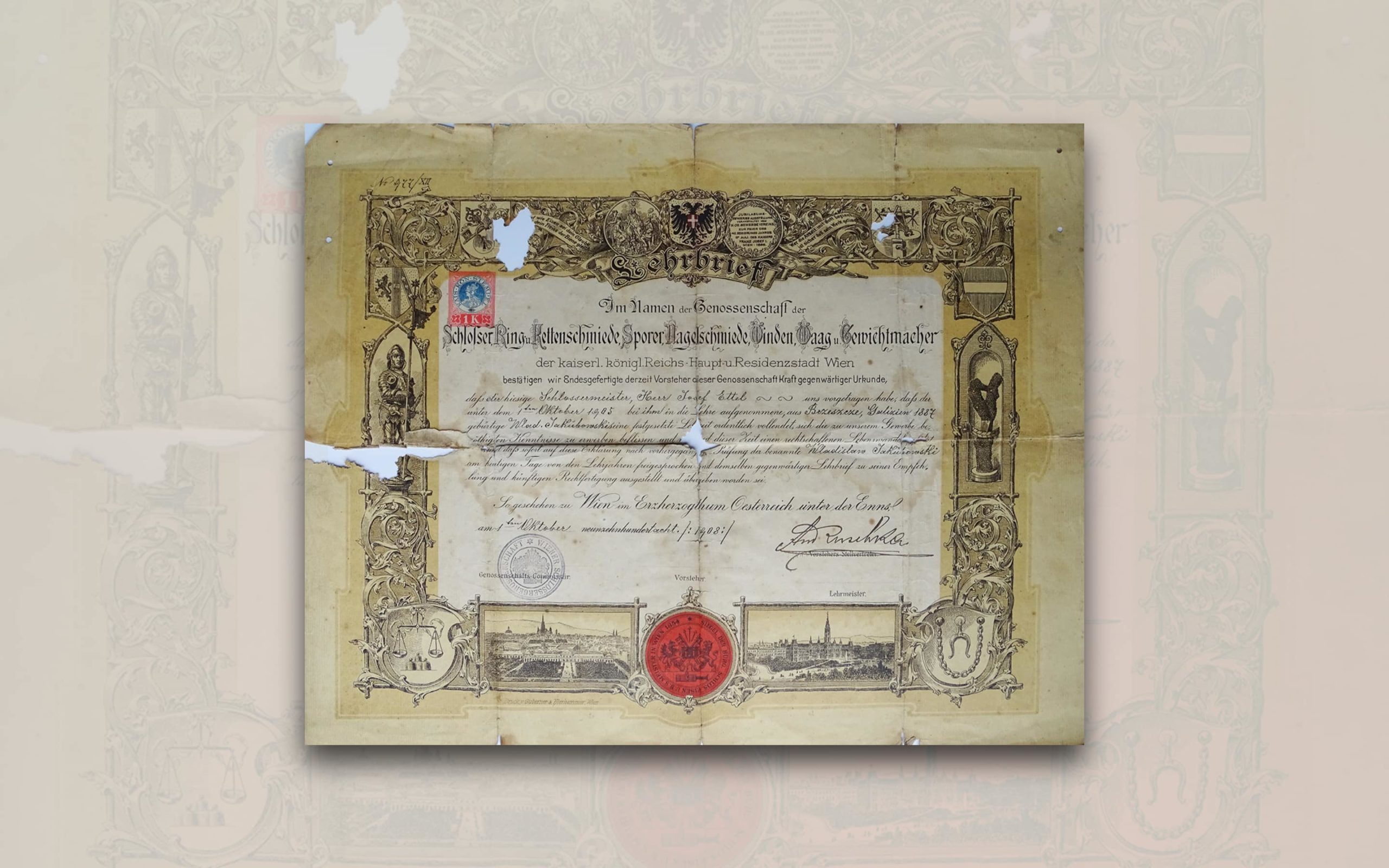 Will it be possible to describe the life of locksmith Władysław Jakubowski born at the end of the 19th century? We are counting on your help.

An interesting document has found its way into the resources of the Remembrance Museum of Land of Oświęcim Residents. It is an apprentice’s certificate from over 110 years ago. It measures 42×33 cm and is richly decorated.

It belonged to Władysław Jakubowski, who was born in Brzeszcze in 1887. He received it after three years of training with Viennese master locksmith Josef Ettel. Issued on 1 October 1908, it confirmed that he had “successfully completed the prescribed period of study, having acquired the skills required for this craft”. (full translation at the end of the text).

Research of the graves in the cemetery in Brzeszcze shows two buried men with this name and surname, including one born on November 8, 1887 and one who died on May 30, 1969. The year of birth matches. So is the man resting in Brzeszcze (along with his mother Ewa) the one who was born here and had his craft skills confirmed in 1908? It may well be so.

What happened to this hero after he received his apprenticeship certificate, which the museum now holds, at the age of 21? What did he do in his childhood? Where did he live – in Brzeszcze or elsewhere? What schools did he attend? Did he start a family and have children? These are just some of the many questions yet to be answered… perhaps you can help solve the mystery?

We would be grateful for any information concerning Władysław Jakubowski.

One photo, many questions

The Remembrance Museum of Land of Oświęcim Residents is a local government cultural institution run by the Oświęcim District and co-managed by the Ministry of Culture and National Heritage.

The Museum’s mission is to carry out activities aimed at the commemoration of the inhabitants of the Land of Oświęcim, with particular emphasis on the period of World War II and the aid they rendered to KL Auschwitz prisoners, often at the risk of their own lives.

The permanent exhibition is planned to be opened to the public in 2022.

TRANSLATION OF THE DOCUMENT

“He who starts his work with God is sure to do it well”.

In the name of the Association of locksmiths, ring and chain craftsmen, spur craftsmen, nail craftsmen, jacks, scales and weights craftsmen of the Imperial Royal Capital City of Vienna, I, the undersigned, President of this Association, confirm by virtue of this document that the local master locksmith, Mr. Josef Ettel, has informed us that Wladyslaw Jakubowski, born in 1887 in Brzeszcze in Galicia, who was admitted to his apprenticeship on 1st October 1905, has successfully completed the prescribed apprenticeship period, has acquired the skills required for this trade and that a significant change in his life has taken place. The abovementioned Mr Władysław Jakubowski is hereby released from his apprenticeship training obligation with the issue of this declaration after previous examination and a journeyman’s certificate is issued and presented to him today as a reference and confirmation for the future.

Vienna in the Principality of Austria under Enns.

Commissioner of the association

Round Seal: Seal of the Bourgeois Master Locksmiths, Ironmongers of Vienna 1854 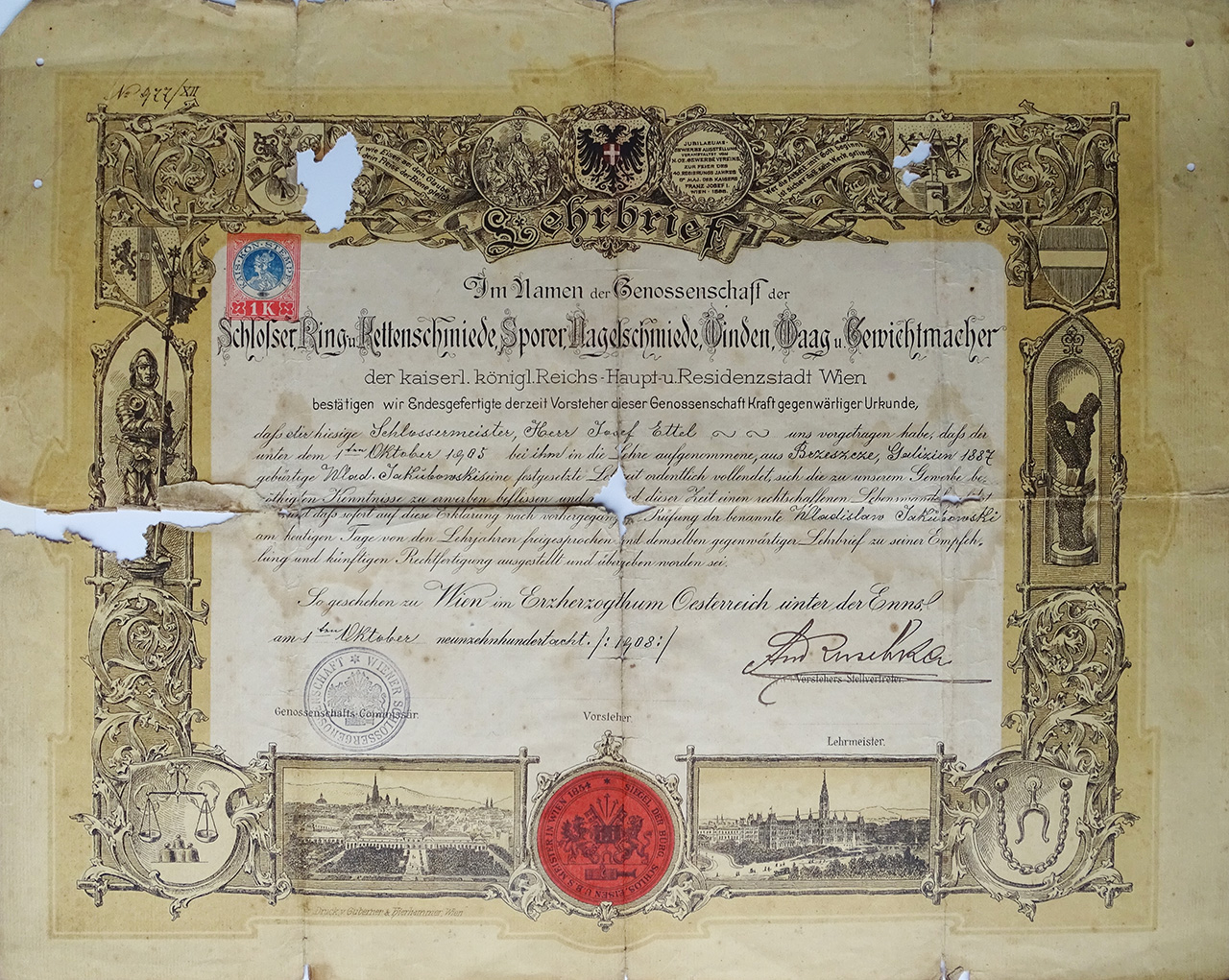