The story of one photograph 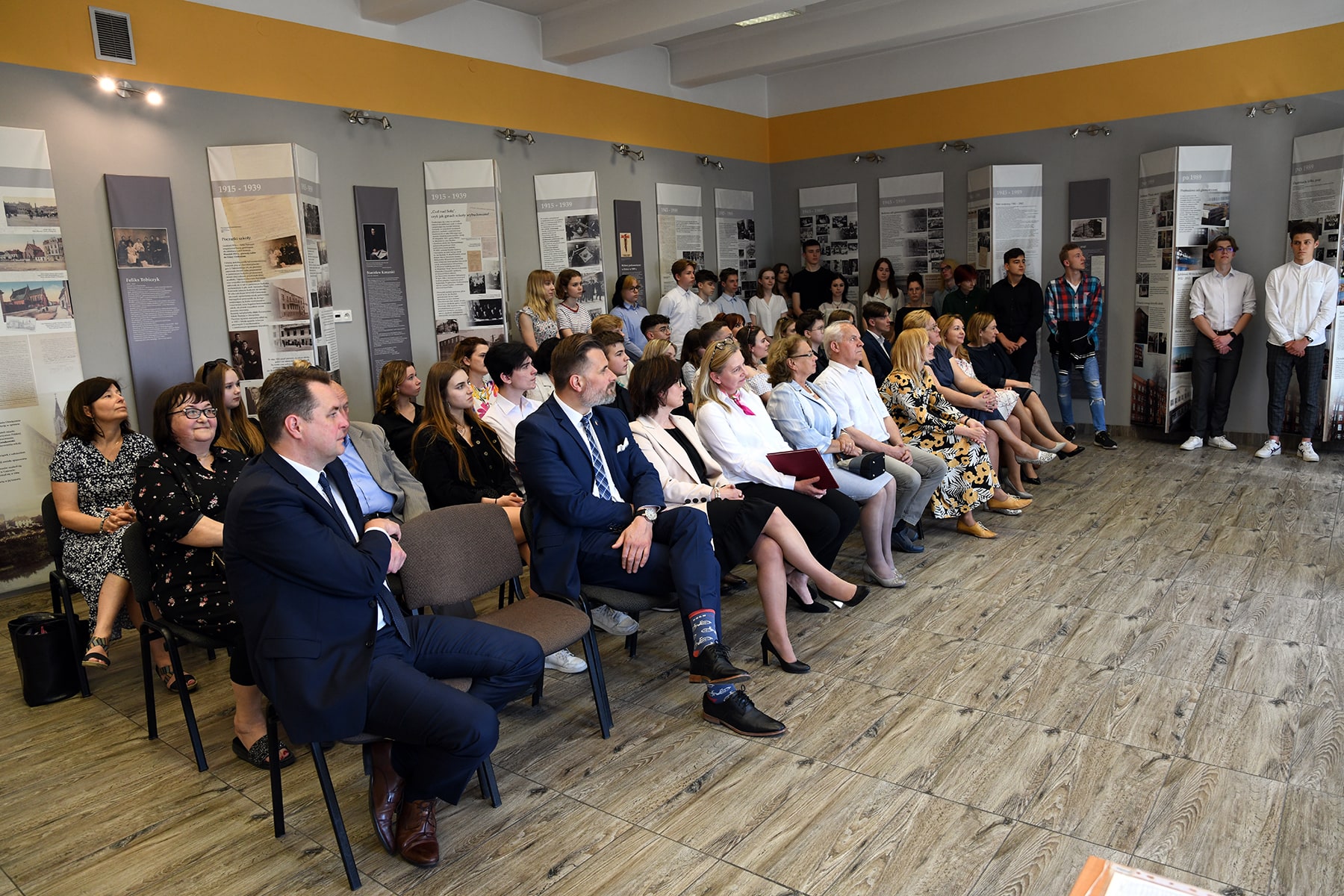 “We managed to identify all the people in the photograph. However, we were unable to determine who took the photograph,” said Joanna Formas, a Polish language teacher who, together with historian Sławomir Podgórski, participated in the project “Hear Forgotten Voices-the fate of the inhabitants of the Land of Oświęcim in the first half of the twentieth century.”

On the print, an unknown author immortalized six students sitting at a school desk. Behind them, an inscription on a plaque reads: Long live the third-grade clique.” The photograph was taken in 1946 in the building of the present Konarski High School in Oświęcim. The students are: Wiesław Targosz, Stanisława Faltus, Adam Jastrzębski, Janina Sztwiertnia, Zbigniew Badura, and Tadeusz Smreczyński.

The teachers, Joanna Formas and Sławomir Podgórski, took the viewers on a fascinating journey into the past and presented their work on boards with historical information and photographs placed in the school staircase.

They focused on the figure of Stanisława Faltus. During the German occupation she lived in Brzeszcze. There, together with her sister Zofia, she supplied food, medicine, and clothing to KL Auschwitz prisoners. She also acted as an intermediary in the transmission of secret messages. After the war, one of the prisoners she helped found her and wanted to marry her. Stanisława refused. She was already in a relationship with Tadeusz Smreczyński. She married him in 1950.

The gathering in Konarski High School was attended by Bogusława and Tadeusz Smreczyński, who helped the teachers to get in touch with Stanisława (who is Tadeusz’s aunt) who is still living in Krakow.

The opening of the exhibition, entitled The History of One Photograph, was also attended by representatives of the county: Oświęcim District Head Andrzej Skrzypiński, Deputy District Head Paweł Kobielusz, district board member Teresa Jankowska, and representatives of the Remembrance Museum of Land of Oświęcim Residents: director Dorota Mleczko, and museum educators Joanna Cebulska and Anita Bury.

“I suspect this story of one photograph will generate further ideas,” said Joanna Formas.

The project entitled “Hear the Forgotten Voices-the Fate of the Inhabitants of the Land of Oświęcim in the First Half of the 20th Century,” is addressed to teachers, employees of cultural institutions, day centres, libraries, and local historical societies in the Oświęcim district. The goal is to create a series of exhibitions presenting the fate of the inhabitants of the Oświęcim area. The event in Oświęcim was the fifth in a row. Previously, exhibits prepared by them were presented by employees of the Municipal Centre for Culture, Sports, and Recreation in Chełmek, teachers from the District Complex no. 6 of Vocational and General Education Schools in Brzeszcze, ladies from the Zator Land Lovers Society, and the Youth Team of the Voluntary Fire Brigade in Malec.