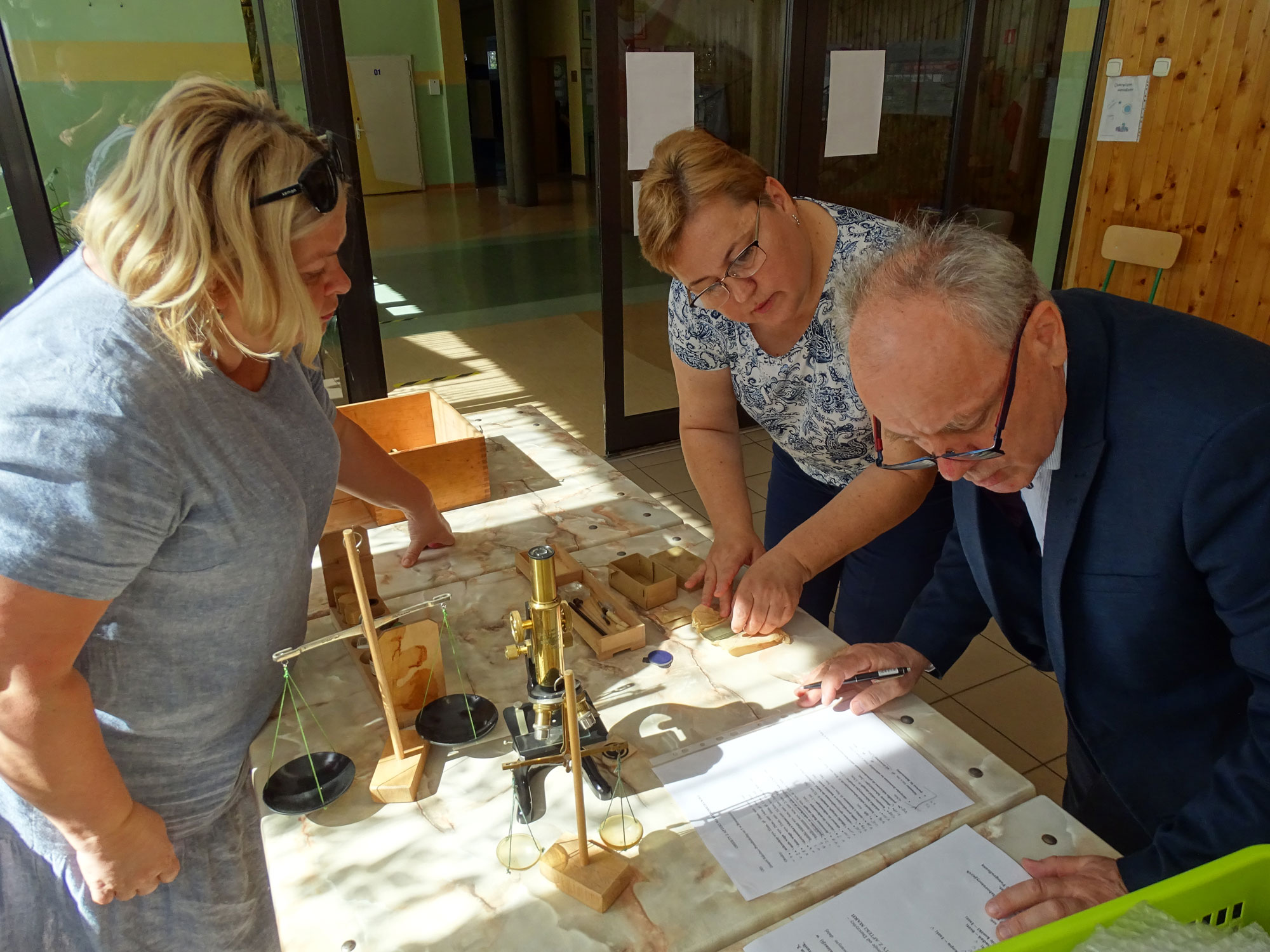 [vc_row][vc_column][vc_column_text]Equipment from the heroic pharmacist’s shop in Brzeszcze and the banner of the former Junior School nr 2 in Brzeszcze have been acquired by the Remembrance Museum of Land of Oświęcim Residents. They are not the only objects to have enriched the Museum in recent times.

Before WWII, Maria Bobrzecka was the owner of the pharmacy “Guardian Angel”. She was an active member of the underground resistance movement during the war when she supplied Auschwitz prisoners with medicine, bandages and food. She continued to help those in need also after the war. She died in Krakow in 1957.
The Junior School in Brzeszcze was named after Maria Bobrzecka and obtained its banner in 2013. At the time, Professor Leszek Konieczny, a relative of Maria Bobrzecka, presented the school with, among other things, a microscope, pharmacist’s scales and chemical reagents used by the school’s patron.

After educational reforms, the Junior School merged with the School-Pre-School nr 5 in Brzeszcze. It was this institution, represented by Principal Iwona Matusik, that presented the mementoes of Maria Bobrzecka as well as the banner to the Remembrance Museum. Director Dorota Mleczko signed the contract of transfer of mementoes on behalf of the Museum.

In February this year, Dr Agnieszka Rzepiela, acting director of the Museum of Pharmacy of the Jagellonian University’s Collegium Medicum in Krakow, spoke of the significance of the aid rendered in the form of medicine. During a gathering organised by the Remembrance Museum entitled “We will remember it all – the fate of Brzeszcze residents during WWII” she described the person and activities of the Brzeszcze pharmacist Maria Bobrzecka.

The story of Maria Bobrzecka entitled “The Guardian Angel from the Pharmacy in Brzeszcze” can be viewed on the Remembrance Museum of Land of Oświęcim Residents; YouTube channel.

Vaccine from WWII and pharmacist’s bottles

The Remembrance Museum has recently acquired more than a dozen pharmaceutical objects, among which there is a pack of vaccinations from 1943. The meningitis vaccination had a use-by date of 3.12.1943. In a small, well-preserved cardboard box, there are three ampules.

Among the other interesting items that have been presented to the Remembrance Museum recently, this time by Tadeusz Drjy from Kęty, there are glass containers and a pharmacist’s mortar – part of the equipment that would have been found in a pharmacy of the mid-20th century.

The Remembrance Museum of the Land of Oświęcim Residents is interested in documents, photographs, mementoes and items of everyday use. Of great importance are eyewitness testimonies.